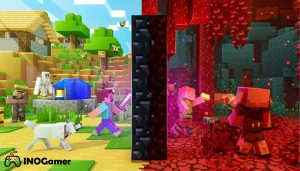 Without a doubt, most kids love video games, and their parents want to find a video game that is not boring, educational, and, of course, appropriate.

Nowadays, technology has reached a position that has enabled the creation of online worlds and communities for kids to explore, design and share. Especially when we are talking about “Sandbox” games, they help children think more critically, use their creativity, and improve their brain storage abilities. In general, Roblox and Minecraft are the most popular Sandbox games in the world.

As a parent or just deciding to have a child in the future, you may want to know which video game is better and who wins the Roblox versus Minecraft competition. This article will help you to think better.

Let’s start to describe the games better for ourselves. Minecraft is a Sandbox computer video game where players explore a 3D world made from blocks. Although it is called a “3D game,”, honestly the graphics are basic and easily adjustable.

As a Sandbox game, children are not going to see a specific storyline, and they should build, explore and destruct freely using everything in the game from the beginning. Minecraft lets players reconstruct the world by manipulating blocks. Any player can travel between environments, explore new things, and add or remove blocks on the situation.

As a newer version of the Sandbox games, Roblox itself isn’t the game; it is just the system that facilitates the other games. The elements of Roblox are somehow LEGO-associated, and graphics quality can be set to high or low by the player. Roblox allows players to travel and interact with things in the world, creating communities and developing their ideas.

Minecraft versus Roblox (Differences Between Minecraft and Roblox)

Well, now what do we have here as differences in Minecraft versus. Roblox competition? We can arrange them into three separate items;

The most significant difference between Roblox and Minecraft is their structure. Minecraft is a self-built system in which worlds are made of blocks and children can manipulate them. In contrast, Roblox is just a platform to let other games run on it.

The origins of mods are too different in these two games. Minecraft is updated with modules made by the core development team. However, Roblox mods are made by another player.

Never forget the cost of a product when you want to buy it. As one of the best-selling video games, you can buy Minecraft for $30 for the basic package or get the advanced pack with more add-on features for $50. On the other side, Roblox is free to start playing, and anyone at any age spectrum can register on their own. Remember that each game has extra plugins that you have to pay for if you want.

Read about finding diamonds in Minecraft.

Advantages in Minecraft versus Roblox

When we are talking about Minecraft vs. Roblox, each video game must be reviewed based on its pros and cons. As a result, we have brought some positive points from each candidate below;

Can users play cross-device with both Minecraft and Roblox?

This subject is another difference between Minecraft versus Roblox. With Roblox, you are allowed to play on your Android mobile or with your Windows PC in your house. On the other side, you can play with Roblox both Java Edition and Bedrock Edition with others, but you can’t mix the editions.

Child account setup in Minecraft versus Roblox; which one is easier?

Based on reviews, Roblox is more straightforward to set up when it comes to accounts for children. In contrast, you must follow a complicated process in Minecraft to set up an account there.

Thank you for reading this text. In general, if you don’t want to spend much money upfront for your child to try the game, Roblox is your best choice. But if you don’t mind investing upfront for a single-player game, Minecraft is the better option. Besides your decision, both Minecraft and Roblox can boost your child’s creativity and critical thinking, and they can benefit from these abilities in the real world.

Home » Game » Minecraft versus Roblox (Which one is better?)