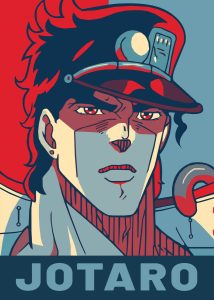 If you are a fan of the Japanese Manga series, you must have heard of “JoJo’s Bizarre Adventure,” written and created by Hirohiko Araki. Voted by most of the audience, Jotaro Kujo is one of the most important people in this series, with a weird character and unbelievable powers.

Who is Jotaro Kujo?

Talking about his profile and age is a little difficult; he is 17 in part 3, suddenly turned 28 in part 4, and gets as old as 40 in part 6. However, we are sure he is a 70s Japanese man with a Japanese root from his father and half-British half-Italian roots from his mother’s side. What about his occupation? He is a student in part 3, a marine explorer in part 4, and Oceanographer in part 6.

Jotaro is introduced as a rough, intelligent delinquent, but he has a gentle heart and is loyal to his favorites. To be honest, Hirohiko Araki was inspired by Clint Eastwood when creating Jotaro. His minimal movements exactly resemble Clint, and Jotaro’s catchphrase was also inspired by lines that Clint had in some roles.

The answer is yes and no. Funny? In fact, Jotaro “does” die in the original JoJo’s Bizarre Adventure: Stone Ocean manga arc, but he again becomes alive thanks to a timeline reset in the final chapter.

As you know, Jotaro has a time-stopping power, and although he was wounded in one timeline, he remains alive by the end of Stone Ocean and in both alternative universes.

If you haven’t watched the “JoJo’s Bizzare Adventure” series and have no idea about Jotaro Kujo, let’s say that Jotaro was killed by Pucci’s knife strike, another character in the story. Speaking more in detail, Jotaro was not the main target of Pucci, and he was killed surprisingly by Pucci’s knife when he was trying to save her daughter.

How does Jotaro die?

In part six of JoJo’s Bizarre Adventure manga, Jotaro’s memory and stand Disks are stolen by Whitesnake. These items, especially the memory disk, are so crucial that Jotaro, without them, will convert to a person with no soul.

Joylene, Jotaro’s daughter, is able to get Jotaro’s Memory Disk back, and he starts to make a recovery. But in the battle with Pucci, when Jotaro and Jolyne’s team face Pucci for the last time in Cape Canaveral, Pucci throws a sharp knife toward Jolyne.

Joraro uses the intact time-stopping power to save his daughter’s life, but the knife strikes him in the face and kills him instantly. However, the good news is the arc ends with Made in Heaven’s powers, and they make the whole timeline for the “Stone Ocean” storyline be reset, and both father and daughter are revived in the story.

Thank you for reading the text, and please share the post with your friends. If you haven’t watched the “JoJo’s Bizarre Adventures” series yet, we recommend watching them at least one time when you are resting. With many action and exciting scenes, a powerful story, and unpredictable ends, this masterpiece can glue you to the screen for hours.

Does Jotaro die? It is better to find the answer by yourself. Although Jotaro is not the only JoJo in the story, he has the most appearance time in movies, and seems it won’t be finished in the early future.

Home » Game » How does Jotaro die and how killed him?